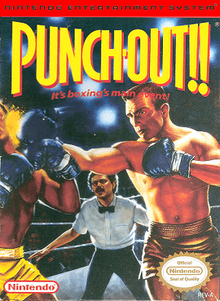 To win the Punch-Out Dream Fight Contest, each gladiator needs to use his skills to take part in dramatic battles on the stage. Little Mac is a gladiator with good health and skills, wants to try yourself with all the other gladiators in the competition and win. The task of the player is to control Little Mac to attack opponents on the ring. Little Mac has six basic movements: left and right shots, special left and right attacks; dodging move, blocking and Star Punch. Star Punches is triggered when the player has a star. To earn a star, players need to hit an opponent just before or after they attack or other special situations. Each person can own up to 3 stars. The player can defend by dodging the direct attacks or blocking the punch by putting his hand in front of him.

Little Mac’s health is represented by an HP bar. When attacked, this HP will decrease to a certain amount depending on the location of the opponent and their attack power. When this HP drops to 0, it means that Little Mac is knocked down in the ring. When defeated, the player uses the control buttons to bring him back after ten seconds have elapsed. Little Mac’s heartbeat is also integrated near the HP bar. Like HP, Little Mac HP also decreases after being attacked. When the heart rate drops to 0, Little Mac’s body temporarily turns pink and exhausted, the player cannot attack but can still dodge and block the attack during this time. In order for the heart rate to return to normal, the only way to do it is to dodge the punches of the opponent.

Boxers must participate in 23 matches to find the champion in the Dream Fight Contest. There will be 3 rounds in each match, you need to control Little Mac to win at least 1 match in those 3 matches. In each round, the gladiator will lose if the gladiator is defeated and within 15 seconds and cannot stand up. There are three ways to win: the opponent is knocked down 3 times in the same round when the opponent is knocked down and can’t stand up within 15 seconds and the referee decides after the timer is over. By accumulating experience after each match, players can control Little Mac to perform more dangerous attacks to win the championship in the Dream Fight Contest.