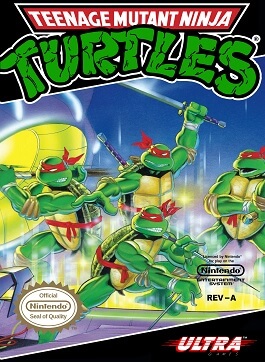 Teenage Mutant Ninja Turtles is a game adapted from the movie of the same name and released by Konami. In the game, players will play the role of one of four Ninja Turtles, Leonardo, Michelangelo, Donatello, and Raphael. With four Ninja Turtles available, the game allows up to 4 players at once. The context of the game revolves around the Shredder kidnapping of Ninja Turtle’s friend April O’Neil and his mentor Splinter. Their mission is to find, rescue teammates and defeat Shredder. Leonardo is a large builder with an average range of distance attacks, Donatello has slower attacks but a longer range and Michelangelo and Raphael have quick attacks but limited range.

Players will use the joystick to control the movement of the Ninja Turtle. By jumping and attacking, players can throw foot soldiers up high. Besides, the other Ninja will coordinate with each other to create a special attack. Raphael with a quick attack by rolling along the ground and ending with a kick. Meanwhile, the other Ninja jumps to attack enemies with available weapons. Enemies will be killed quickly by making them hit the wall or other hard objects.

The game is divided into 6 stages. The player controls his character through all stages to complete the goal. In Mission 1, the player’s goal is to rescue April O’Neil, who has been kidnapped and taken by Bebop and Rocksteady. After defeating the enemy, the player will go on task 2. On the Hudson River, the Turtle Ninja dives into the river to try to clear all explosives before the dam can explode. In Wall Street on mission 3, the Turtle Ninja discovered the enemy’s lair and where Splinter was kidnapped. The player’s goal in this mission is to defeat the Mecha Turtle and rescue Splinter. At the end of mission 3, Shredder escaped in a helicopter. The task of the player in the following missions is to find and destroy Shredder.

Players can pick up some items on the journey to complete each mission such as Shurikens (throwing stars), Triple Shurikens (allowing the launch of three Shurikens), Boomerang and Kiai. Sometimes, these items will appear on the run of the enemy. There are also some items that players will find around in buildings or drains. These include Anti-Foot Clan Missiles, ropes, turtlehead icons, pizza. Each of these items has a great effect in the journey of Ninja Turtle. For example, a slice of pizza will restore 25% health, half a pie will help 50% health and a pizza will completely restore the health of Ninja Turtle. Using the items collected in each mission will help players quickly destroy Shredder and complete the game’s mission.