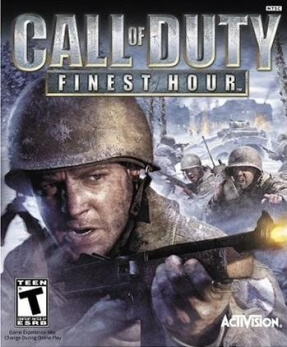 
Call of Duty – Finest Hour is a first-person shooter game and is part of the Call of Duty series developed by Spark Unlimited, activated by Activision
released on November 16, 2004. The game takes place during the peak of World War II. Join the game you will be immersed in the soldiers of the United States, Britain, Russia fighting in many battlefields and in various locations from the Soviet Union to North Africa. From the first perspective will bring you the most authentic war experience. The respective weapons at the time, with a total of more than 30 different types, were also several vehicles. There are up to 15 missions, each with different goals such as destroying certain enemies, destroying buildings, etc. In the game there will be other teammates with you to fight, when it is best to start you should follow their advice if you do not want to sacrifice in vain. The graphics of the game are extremely realistic, you can clearly see the bullet path moving with dust flying everywhere because of the bombs. The gameplay of the game is linear, but the way to lead the player is not boring, this is also a strong point when referring to this series.

Pirates: Legend of the Black Buccaneer

Noddy and the Magic Book