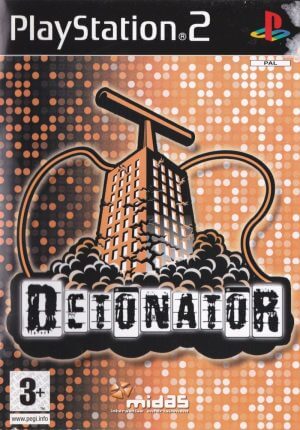 Detonator is a puzzle game in which the player must destroy buildings with dynamite. It has three game modes: The Main Game: This is a single player game with four modes, each mode has five buildings to demolish with different buildings use different kinds of explosive. Challenge mode: a single player game in which the player must demolish ninety-nine stages within the constraints of time and limited dynamite Battle mode: This is the two player option in which players compete to demolish four buildings as quickly as possible, this is made more difficult as the losing player can restart the winning player's game map thus slowing them down Each building consists of a series of maps or stages in which the player must place and detonate blocks of dynamite. On the left of the screen is a menu showing the shapes of charge available, the player can scroll up/down this list with the SQUARE & CIRCLE buttons. Once a charge type has been selected the player places it in position with the D-PAD buttons using the R1 button to rotate where necessary, they then use the CROSS button to detonate the charge. All blocks within the stage that are covered by the charge are damaged as are all blocks that are adjacent to both the charge on one side and another damaged block on the other. The object being to damage all the blocks with the amount of dynamite and turns specified for the stage. When all stages in a building have been completed the player is treated to a video sequence of the demolition and the next building is unlocked.