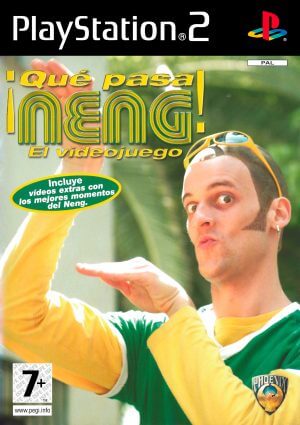 ¡Qué pasa Neng!: El videojuego is a game released exclusively in Spain starring Neng de Castefa, a comedic character from the early 2000s Spanish late-night talk show Buenafuente. The game consists of five mini-games, each of which have to be completed three times in order to move onto the next and unlock the game for free play. El Embalaje: a Tetris-style game where you need to use falling blocks to fill up three 12×4 rows in order to make room in Neng's car for passengers. Any blocks sticking out the top will disappear and cause you to lose points. The blocks that fall are identical to those in Tetris apart from the line piece, which has been reduced from four blocks long to three blocks long. Ambulancia: in this game, button prompts appear at the top of the screen in the form of vinyl records corresponding to one of the four face buttons on your PlayStation controller. Successfully pressing the correct button will add the record to your stack. If you press the incorrect button, or don't press the button fast enough, all the records in you stack will disappear. This first person to complete their stack of records is the winner. Spot Konstitu: in this game, flies are flying around the screen in-front of Neng. You've got to move your cursor to the flies and press X so that Neng will squish them with his nose. La Guardia: a simple Qix-like game. You control Neng's remote controlled car which you use to draw rectangles in order to claim territory. While you're doing this you have to avoid the bodyguards that are running around. La Fortuna Rueda: a slot machine like game involving cars. You have to spin a wheel then stop it to try and get it to land on the car you want. Matching three of the same car will give you points, and to win the game you need to match three Ferrari cars.