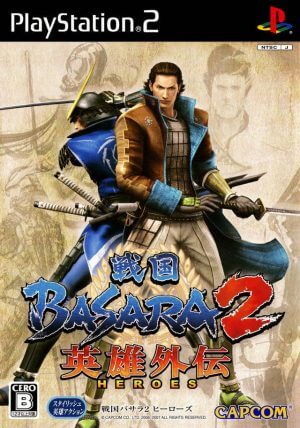 戦国BASARA2英雄外伝 Sengoku BASARA 2 Heroes (aka. Sengoku Basara 2 Eiyuu Gaiden) is the expansion for Sengoku BASARA 2 released by Capcom for the PlayStation 2 and Wii on 29 November 2007. Game Modes Story Mode Very much like Sengoku Basara 2’s Story Mode, players pick a character and go through his/her story. However, unlike Sengoku Basara 2, the player can only choose among 3 (newly playable) characters. Katakura Kojūrō, Azai Nagamasa and Oichi are the story choices. The player will receive the third costume on the characters. Gaiden Story Mode A new mode added in Sengoku Basara 2 Heroes. Gaiden Story Mode plays like Story Mode, but the difference is that it is shorter, comprising of only 3 stages each. The available characters for this mode are also limited. Fūma Kotarō, Maeda Keiji, Date Masamune, Sanada Yukimura, and Chōsokabe Motochika are in the Gaiden. They can also unlock the third costume of the characters. Conquest Mode Conquest Mode is still like in Sengoku Basara 2. However, this time, it feature a new (random) battle and can now be played with 2 players. Finishing it will unlock the player’s second costume Free Battle Mode Like in previous Sengoku Basara game, Free Battle Mode lets player play any unlocked stage as any character. Stages (including exclusive stages) from both Sengoku Basara 2 and Heroes can be played here, provided they are unlocked. Tournament Mode Tournament Mode from Sengoku Basara 2 is back, but with a lot of differences. There are now 2 type of tournament: Grand Tournament and Ultimate Grand Tournament. Like Conquest Mode, this mode can also be played with 2 players. Players now choose 2 characters for this mode and play it like a tag battle (if one player) and split-screen coop (if 2 players), making it easier. If a character gets KO’ed, he/she can be revived by the other player if coop or if in single player, the other character takes his/her place and gets revived in the next round. The enemies fought in rounds are also different. The roulette feature that appears after clearing each round is removed. Players are still awarded the best weapon and armor for the characters used by winning 100 and 50 rounds respectively, and can still save every 10 rounds to keep the progress. Grand Tournament plays very much like Sengoku Basara 2’s Tournament Mode. In this tournament, there are challenges which the player/s can do while they are fighting through the tournament, completing them rewards players with gold and a rice ball and completing all 60 of them unlocks a title fan. The EXP gained from clearing the rounds are divided among the 2 characters used. Ultimate Grand Tournament is mainly the same as Grand Tournament. However, instead of getting EXP for clearing rounds, gold is rewarded. There is also a time limit which refills and accumulates upon clearing each round. Versus Mode Another new mode added in this game. Versus Mode puts 2 characters against each other in one of 8 types of competitions. It should also be noted that this is the only mode in which the AI can use the Basara Attack.