TD Overdrive: The Brotherhood of Speed 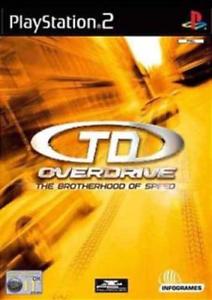 The game features various modes including Quick Race, Single Race and Underground, the game's main and story mode. Single Race mode includes Linear, Circuit, Cop Chase, Drag Race, and Navigation Challenge. The cars do not suffer damage and they can be painted pre-set or custom colors. There are 26 cars in total and 12 of the cars have police variations. The game has a rock, rap and techno soundtrack consisting of 10 artists and 17 songs; some are played in races and all are played on menus. The game also includes Atari's Pong as a minigame, which can be played while races are loading. One can play against the computer, or against the second player (during multi-player mode).