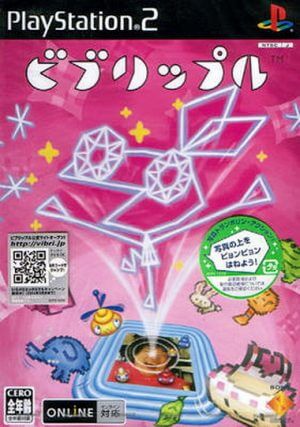 Vib Ripple is the sequel to Vib Ribbon, and the third in the Vib Ribbon series. While Vib Ribbon was based around the tone of music, and Mojib Ribbon was based around lyrics, Vib Ripple is themed around drums and percussion. Players once again control the vector rabbit Vibri as they play. This time, they must move her around a gigantic picture (think of the picture as a giant trampoline), and use the any of the face buttons to make her jump. If you time the jumps to the beat of the music, Vibri will jump higher, and jumping on certain parts of the picture will reveal 'Peta Characters' – 2D representations of objects, such as bunny rabbits, onions, and presents. The goal of each level is to reveal the Peta Characters shown in the crown at the bottom left of the screen (of course, you can uncover more if you're game). In later levels, blobby enemies known as 'Boonchies' turn up and begin to slowly zero in on Vibri. She must dodge these enemies in addition to bouncing in time to the beat as she uncovers Peta Characters. Vib Ripple, like Vib Ribbon and Mojib Ribbon, allows players to extend their potential playtime. You can create new levels by hooking up certain USB cameras and mobile phones, and uploading photos to your PS2. However, as with the previous games, the preset levels seem to work the best.

The Matrix: Path of Neo

The King of Fighters 2002: Unlimited Match

Way of the Samurai 2