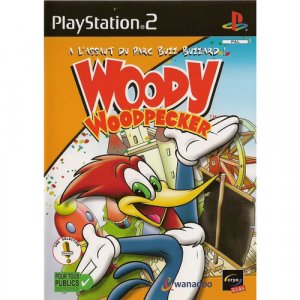 Woody Woodpecker: Escape from Buzz Buzzard Park is an adventure game in the third person, in which the player controls his character in an environment modeled in computer graphics and real-time 3D , with the camera placed behind or around the figure.[2] The game consists of twenty-one levels of type platform.[2] The progress in the game is based primarily on the skill and dexterity needed to overcome obstacles that present themselves (to cross chasms, climb walls) or unblock access to the following level by manipulating objects (Woody sometimes needs use its beak to that effect).[2] When Woody must skip a cross indicates in advance the precise location where it is about to fall, thus aiming at best.[2] The game also includes a battle against the minions from Buzz Buzzard Woody can attack in different ways, using its beak or special attacks.[2] Besides Woody Woodpecker himself, the player can also choose to play Knothead or Splinter once Woody found one of them.[3]