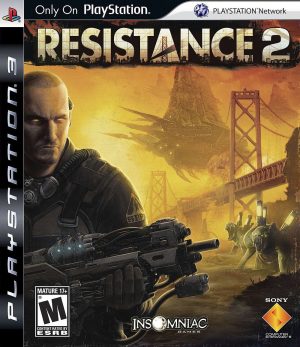 “Resistance 2” is a fighting game, sci-fi action at first perspective, developed by Insomniac Games and published by a well-known publisher in the electronics industry of Sony Computer Entertainment. The plot of this part still revolves around the protagonist Nathan Hale during the time he came to the United States. Once again, he fought the Chimera monsters. Other than the first part, in this part 2 Hale will be an element of an elite force of soldiers called “The Sentinels”. This time he is infected with this Chimera virus and forces him to use a stimulant that inhibits the spread of the virus and controls them. In the game, you will control the main character is Hale and use a modern weapon called High-Velocity Armor Piercing, abbreviated: HVAP to destroy those alien monsters. The HVAP was the most modern weapon of its time, incorporating the technology of human weapons in 1950 with the technology of extremely advanced aliens weapons. Players will have the opportunity to role-play and challenge their own courage, go to destroy those monsters and prevent the spread of their disease to humans.

How to Train Your Dragon 2