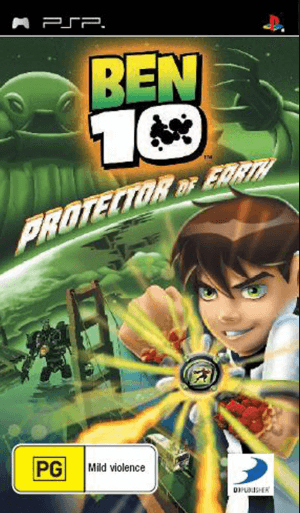 During a trip through the night near the Grand Canyon, Ben did not know that when their sleep was a strange creature like mosquitoes drained of energy, just enough to make him turn into some alien was Four Arms and Heatblast. Ben was awakened by a loud noise outside so he decided to go outside to check and discovered that the alien device named Omnitrix crashed into the Grand Canyon and the Drone was raging here. After Ben clears the robots, he battles a giant boss and ends the battle with the help of a crystal.
Thanks to his grandfather Max and Gwen, Ben knows that this crystal will help him recover energy and after absorbing the crystal, he can turn into XLR8 and ready to break the plans of the enemies ahead.

Besides the character Ben is provided by default from the first time, there are 5 other aliens that you can unlock and role-play in the future. Four Arms and Heatblast are unlocked when Ben reaches a higher level. While other forms like Cannonbolt, XLR8 and Wildvine force players to complete certain tasks. Players even can unlock the main control, to bring the ability to stay in space indefinitely or convert alien forms without reducing Omnitrix energy. A common point that most games have, attacks, limited or invincible power can be unlocked or leveled up when collecting enough Omnitrix. In other words, it plays the same role as currencies and materials. An interesting thing that certain players cannot miss is that once the player collects enough unlocking features, he will receive three three-card Sumo Slammer hidden in each main level. If you can survive and pass the gate, you will be rewarded with titles and ranks depending on the battle speed and achievements. A is the highest rank. It will bring more interesting benefits. Overall, the Ben 10 series has always not disappointed the fans of the movie and the game, certainly this is a game to try if you are a fan or just a new player who is interested. interesting and want to try their best.