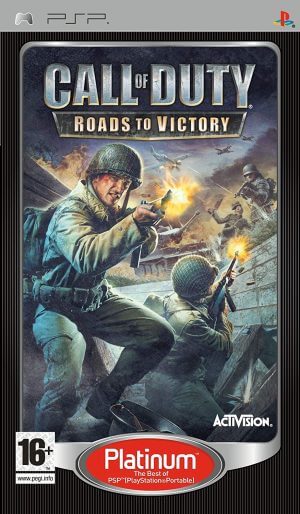 The player plays Derrick Warren, a soldier from the 82nd Army who participated in an attack to retrieve Altavilla from the Germans. Then he went to France with Daniel Ferguson. They had a very bloody war with the Nazis at Ste.Mere Eglise. Next, you will play as a trader Jonathan Shepherd, after the ship encountered a problem near Carentan, the squad had regrouped with other boats and attacked a nearby town. Then the player plays Sergeant Gerald Miller in charge of protecting a convoy passing through Nijmegen and destroying German Flak88s in a nearby park. As Corporal Alan Bradshaw, you will have to join the Battle of Scheldt. Continuing will be the wars in World War II.
Call of Duty-Road to Victory is a third-person shooter game in which players will have to transform into many characters to participate in battles in World War II. You will be able to relive the feeling of the 1940s with soldiers from 3 countries: the United States, Canada, the United Kingdom, and engage in 14 different missions, including many combat types such as besieging enemy bunkers, bombarding ethereal planes,… All of these battles will be rewarded with gold, silver, and bronze medals based on the effectiveness you complete. In addition to the campaign mode that is the core of the game, the publisher also offers us a number of other beautiful styles such as capture flag, Deathmatch, king of hills, holding banners. The variety of weapons is a prominent feature of this game with arms from powers such as the United States, Britain, or even Nazi Germany. However, this game still has some limitations when the AI is quite weak. There will be times when you are only a few feet away from the opponent but not shot. The slow of the opponent and the regular revival of the soldiers will make you feel a bit boring. But this does not mean that you will be immortal in the game. There will be times when the protagonist is blown away by invisible flames from an enemy even lie outside the screen that the player cannot see.