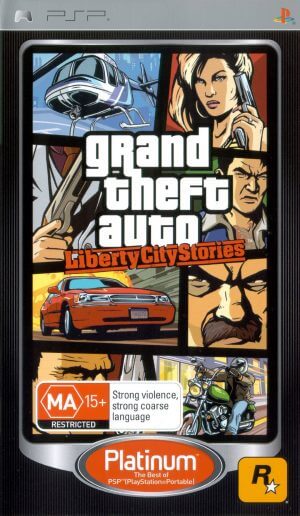 At the behest of Leone-a notorious crime boss, Tony, after assassinating a man, went abroad to avoid police surveillance. He decided to return to Liberty City. At there, he met Salvatore and Vicenzo – another member of Leone’s criminal family. Tony decided to become his junior but soon gave up when he realized the boss was planning a trap to let the police catch him. Vincenzo then made an apology call and arranged an appointment to settle; actually, it was a trap to kill Tony, but he realized and finally defeated him. After that, the man continued to work for the Leone family to prove his loyalty, but then trouble struck.
Grand Theft Auto: Liberty City Stories is a third-person role-playing action game set in the city of Liberty criminals. Players incarnate into Tonya’s genuine gangster. Of course, as other versions of Grand Theft Auto, the gameplay of this game will focus on shooting as well as driving. However, the game has some differences, such as the city has more buildings or the camera becomes exceptionally flexible when it can rotate around the character. The mechanism of tasks in the game is also very clearly divided. The main missions will naturally spur the game’s storyline to lead to new situations while the rest helps the character make money, such as taking a taxi or ambulance. If the player does not want his hands to be dirty, don’t worry, the publisher will also have other pure jobs so they can make a living as playing a guy who delivers noodles or pizza. However, you should note that the amount of money earned will be quite small because bad work is always more productive, right? Stealing a car and taking it to a garage to receive $ 5,000 is one of the best jobs the character should do. Making money isn’t hard, is it? Besides cash, several completed missions also give you additional weapons as well as means of transportation. Whenever a job is available, a map will display a symbol so the main character can find the place of delivery. The publisher also supports up to 6 players. It’s okay to do bad things with your friends.