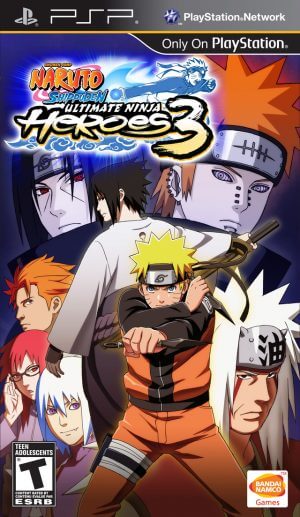 Like previous Ultimate Ninja Heroes, the 3rd release still holds. The driver is very simple, takes place on a 2D plane. With the start of Operation Master Road, when Naruto returned to Konoha to rescue his friend Gaara, who had been kidnapped by the Akatsuki organization. Overall, the script is quite simple, and Naruto fans will be able to see his maturity as he goes through the process, fighting hard and perfecting his skills.
The first scene that catches the eye of the player is a branching path (world map), with minigames and prizes. By overcoming these challenges, characters will receive Ninja Points – which can be used to unlock new features, maps, and techniques, giving you a clear sense of progress. The highlight of all four sections in this series is still a four-person fighting mode with the help of three computer-controlled AI. However, the difficulty level has been raised significantly. Be aware of attacks coming from opponents, as they are no longer predictable. Also perform ninjutsu correctly to end the battle quickly, because the time is limited and it is gradually counting down to 0.