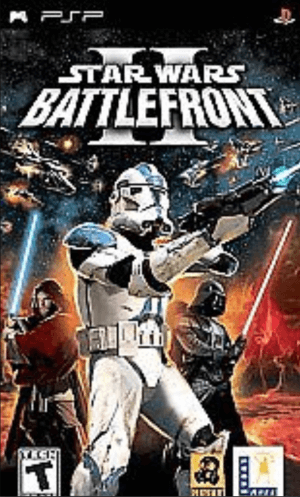 You are a fan of science fiction movies, and want to have this experience? Star Wars – Battlefront II is full of surprises on the journey through space with dramatic battles. Star Wars – Battlefront II is a video game based on the Star Wars epic series, developed by Pandemic Studios and released by LucasArts. Coming to the game, you will incarnate in your favorite characters, choose the most advanced costumes and weapons, experience the space areas that reality was always wished to achieve. Unlike the previous version, Star Wars – Battlefront II this time was invested by producer Christopher Williams on combat characters, accessories, combat vehicles, maps and especially, more new missions appeared. Like action games, Star Wars – Battlefront II provides players with 2 views (first and third-person perspective), but there is a restriction that you can only play in single-player mode, you will have to lead an army to conquer other planets and take control of that planet. Even so, it is not possible to make gamers give up the choice of a game full of fun, healthy as well as the greatness of graphics, sound, and quality.

Like Star Wars Battlefront, time is divided into two periods: Cloning War and Galactic Civil War. Players can use among six types of troops, four of which are the most basic: infantry, heavy weapons, snipers and engineers. This version includes 3 modes. In BattleFront mode there is only one campaign, Rise of the Empire. Conquest mode is also quite familiar to long-time players, with the mission is still leading an army to conquer other planets. A successful incursion will be rewarded to buy new types of troops. Finally, in Instant Action, you can choose any level such as Hunt mode, Capture the Flag (CTF), Hero Assault and Space Assault. In my opinion, Hero Assault is the most interesting because it is possible to control the iconic characters in Star Wars and divide it into two teams, heroes and bad guys. The goal of each faction is to kill a required number. Space Assault allows players to use spacecraft to fight with other ships or facilities on board. The game will end if one team wins a set number of points.