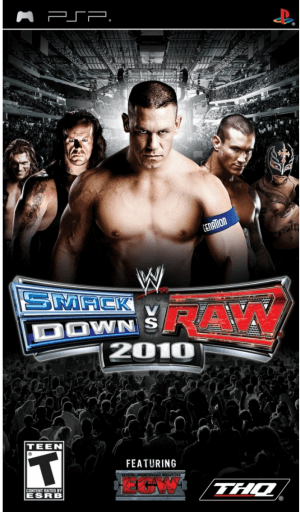 WWE Smackdown vs.Raw 2010 is a professional wrestling game, developed based on a popular and popular WWE sport in the world. However, instead of making matches that were scripted, this game was more realistic and violent. As one of the WWE squad members or an anonymous character created in Super Star mode, you will have to defeat all other opponents to claim the championship. With open and free play, the goal for each stage is just draining the wrestlers’ health watches on the ring, to get the key to the next round. However, if you feel constrained, join Story Designer, to write your own story.
If you want to conquer and fight more, Road to Wrestlemania is a great challenge to seize. In it, the participation of more than 50 excellent warriors, including the champions of previous years. But in my opinion, choose one of 67 available characters, instead of creating new. For example Seth Rollins, Roman Reigns, or Braun Strowman. Each of them has good fighting techniques, and it would be even better if you could string them into combos.