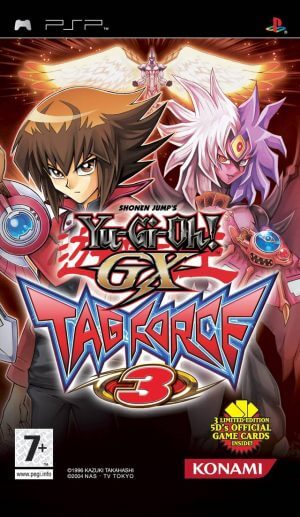 10 years after Yugi Mutou’s journey, the Duel Monster game has become extremely popular in life, the players grow like mushrooms, and their skills are also much higher. The young Jaden Yuki, on his way to the school of Duel Academy player training, met the game king Yugi Mutou and received the Winged Kuriboh card. At school, he met Syrus Truesdale, Chumley Huffington, his mortal enemy Chazz Princeton and an extremely mysterious person named Zane Truesdale. At there, he had an exciting card game, and it forged him the will never to give up. After graduating, the Winged Kuriboh card brings him back to the past to confront himself.
Yu-Gi-Oh!Gx Tag Force 3 is a magical card game in which it requires the player to have careful thought when deciding which card to play. This is the reason why this game attracts so many players. Every turn on the pitch needs a proper card instead of putting all the most reliable cards you have on the field. A quick introduction to this game, starting each game on both sides, will be given a certain amount of points. These points will be lost when monsters or enemy spells to attack. When one side has a zero score, the game ends with the other team winning. The only downside this game encounters is the game’s AI is complicated. Although not to the extent that it can counterattack all your moves, it is a tough challenge, and if you are a beginner to play Yu-Gi-Oh, you may need to consider before challenging yourself to this game. There is also an audience feature that allows you to test your opponent’s deck so you can research your strategy before starting a match. Players can also participate in mini-games, which are not part of the storyline. Do not worry if you feel that your deck is not strong enough because, after each game, the reward for the winner will be new cards to increase the strength of your deck.